Last week my colleague and I were in Rotterdam for the European Ruby conference. As I mentioned in my last post, Ruby is the main language that we use in our team. Of course we had to go there!

Rotterdam is an awesome city and has so much to offer! I’m not good with art and architecture, but I was impressed with what I could see in this amazing city. And the port of Rotterdam is the largest in Europe! What’s more, you can reach many things without using the public transport. From the central station to our hotel it was only a 30-minute walk.

The venue for the conference was extraordinary and an absolute highlight. It was a ship (!) - the “Rotterdam”. 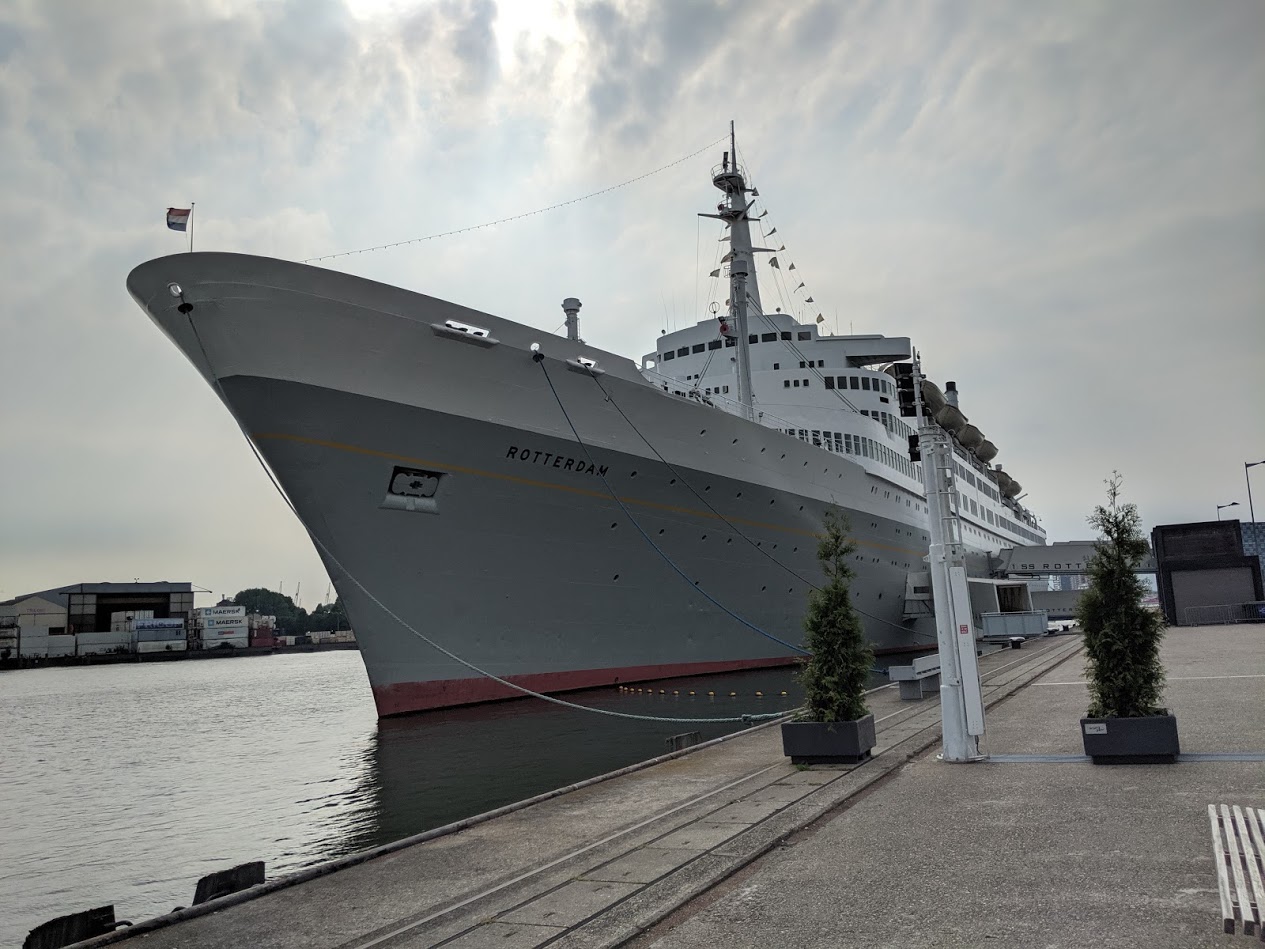 After the registration we gathered together with the other attendees, had breakfast, and did some networking (there was also lot’s of merchandising). When it was time, we went to the ship’s theatre where the talks were held. After the organizational stuff and the sponsor’s presentation the conference started.

The first speaker was the creator of Ruby Yukihiro Matsumoto who talked about the future of Ruby. He announced Ruby3 to be launched in December 2020. The main novelty will be the static typing. But he let us know that he personally doesn’t like it because it is not DRY (Don’t Repeat Yourself). He’s going to slit up the project into ruby and static typing, so everyone can use what they prefer. Personally I’m going to try to persuade my team to use it 😃. 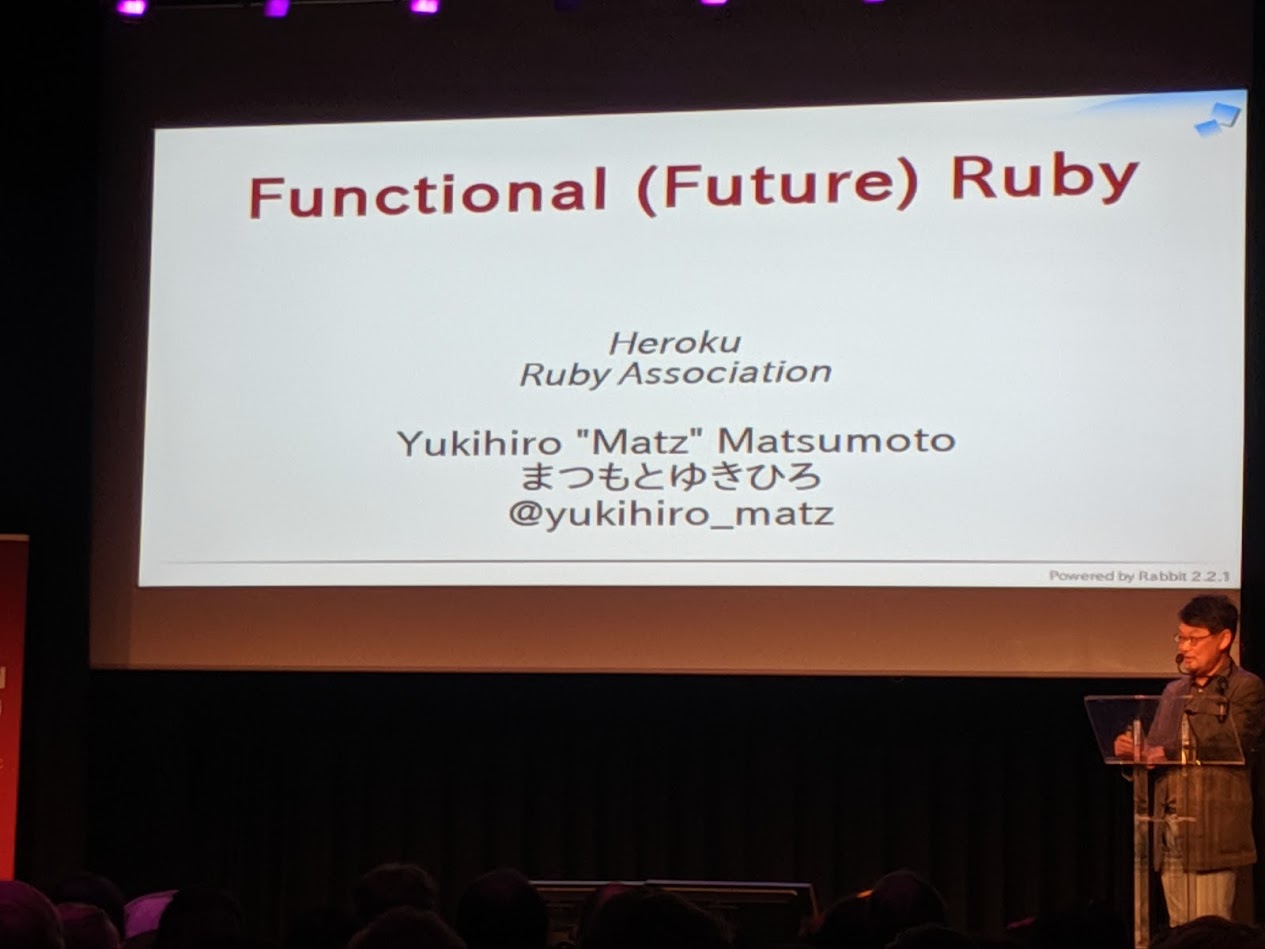 Hongli Lai presented us in What causes Ruby memory bloat? his solution to the problem of memory fragmentation. He mentioned the solution is easy: he presented an easy solution in which he applied a function to defragment the memory. When applying this fuction to an app, the memory was reduced from 230 MB to 60 MB. The solution that he presented is Fullstaqruby. Even though still in beta, we should not lose sight of it.

Torsten Schönebaum woke up my childhood in his talk Building bricks with MRuby: A journey to MRuby on LEGO robots. With ruby using mRuby and Lego he did a robot that can type a message. 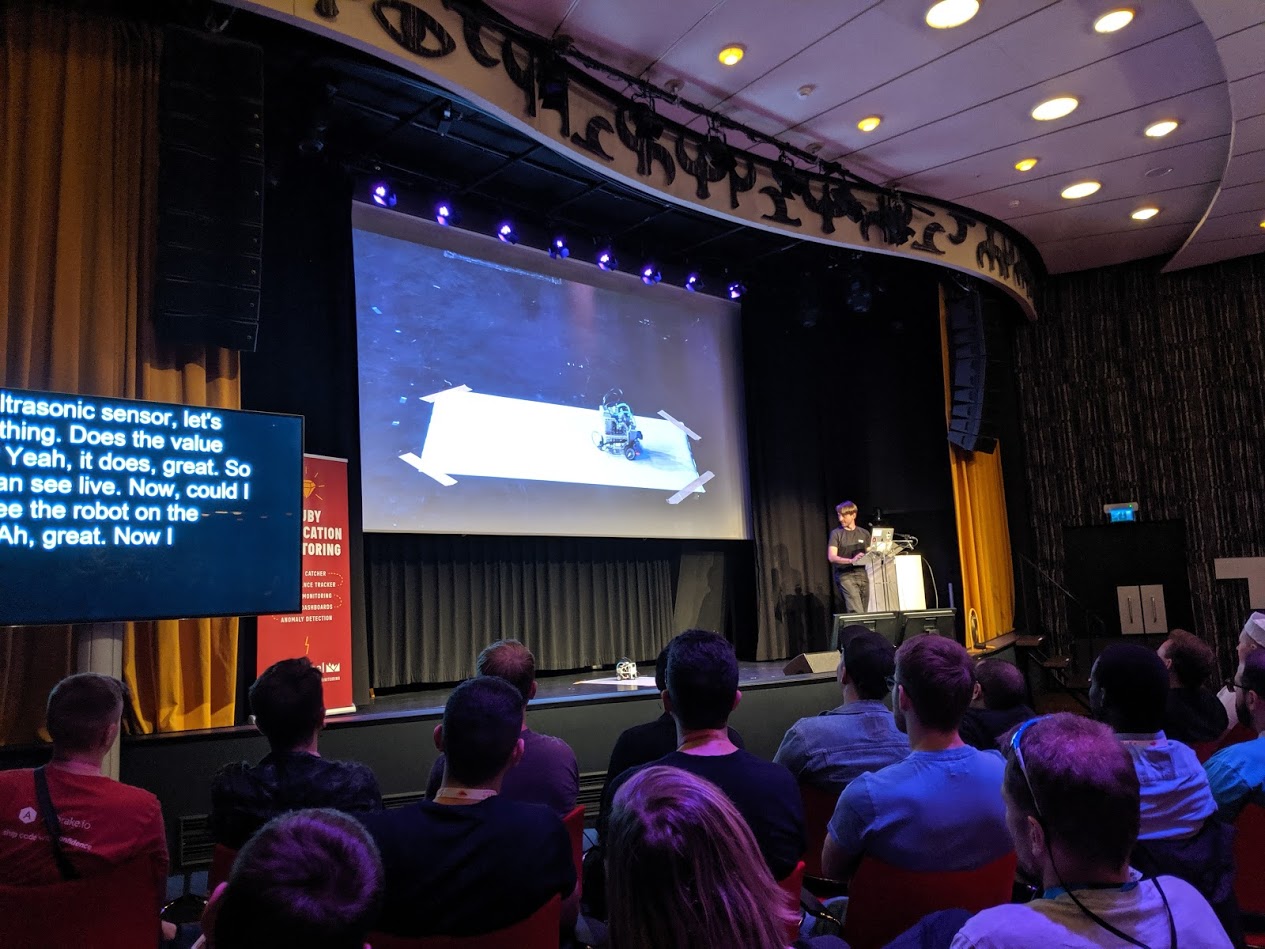 We started off with a list of possible cities for the next Euruko, amongst them also Melbourne. Yes, Australia! 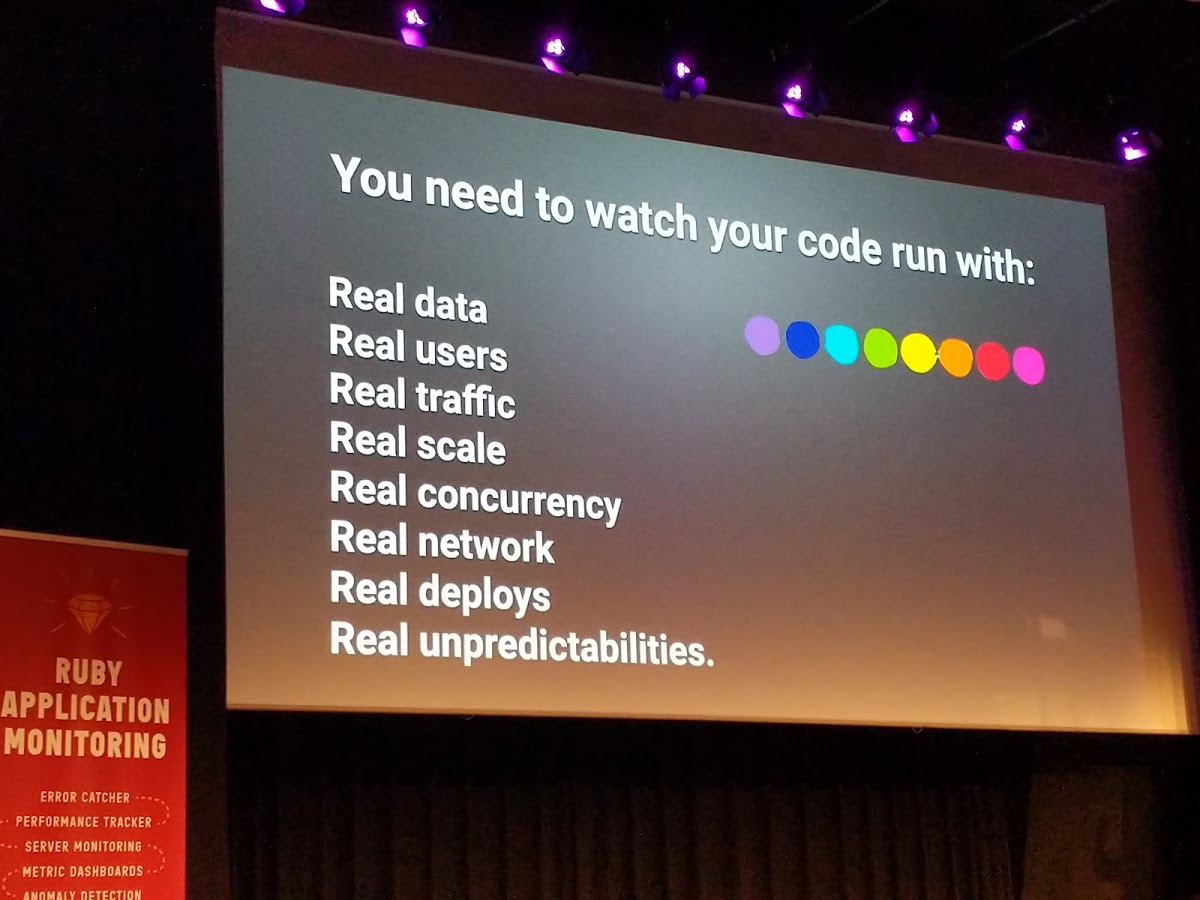 Yusuke Endoh deepened more in the topic of Ruby3 and we were able to see how types will work. Jan Krutisch gave us a master class of music, and he showed us how we can make music with ruby. It was interesting and exciting at the same time.

Finally I want to highlight the last talk of the day: The Past, Present, and Future of Rails at GitHub. Eileen M. Uchitelle talked about her experience on a fork of rails to have a custom feature and her odyssey to update it. She highlighted that we need to invest in updating our apps. If we don’t do that, in the future we can have a monster such as the legendary Hydra witch - for each bug that we can solve, there’re 3 more.

Each day we had a special talk: the first day Melanie Keatley showed us her owns Pokemons in her talk It’s very effective; using Pokemon to catch all code smells. The second day Richard Schneeman as Marie Kondo explained us how we can relocate the code in order to optimize our code. In this talk he used his daugther as a voice actor for a rabbit - that was awesome.

Miriam from Stripe talked about a gem called Sorbet that allows us to see the normal method definitions, and how these could be integrated in our VSCode. I swear that that was what most pleased me. I’ve been trying for months that my visual works as with TypeScript. Another incredible talk was from Norma Miller who was parsing in real time to transform every talk into text. She talked about the machine that she uses, and in that moment more or less she typed 350000 words and had a ratio of 99.65%. It was amazing to see how she works! Anecdote: a volunteer tried to replace her but couldn’t make any phrase while talking.

Once all the talks were done, it was the moment to know which is the city where the nex Euruko will take place. Helsinki won, and I’m going to say goodbye with the last words of the future organization: “Euruko is finished, but the next Euruko will be Finnish.” 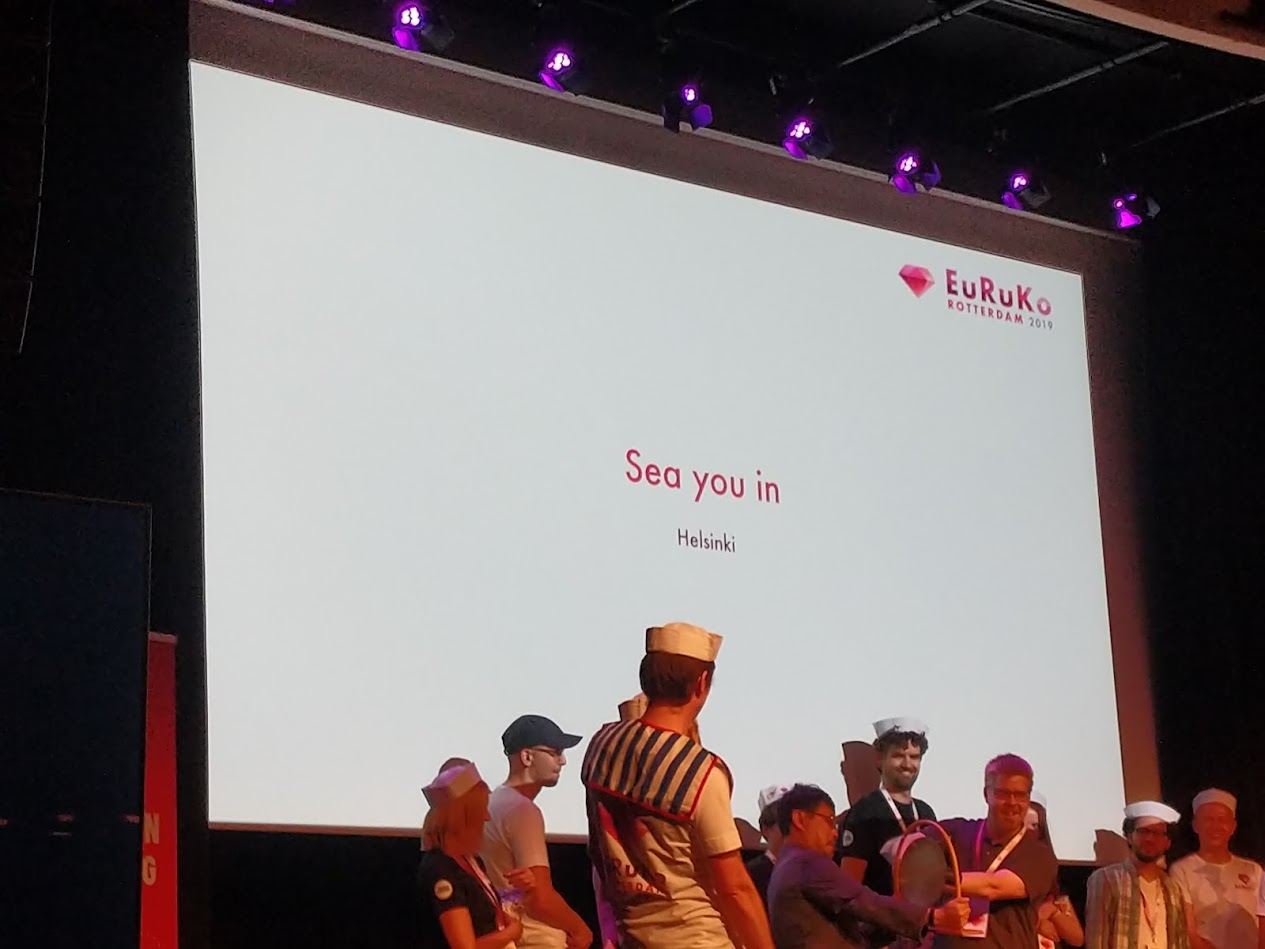 German San Emeterio is a JavaScript Developer who is now into Ruby on Rails. He is fond of video games, and mangas, as well as loves to learn new technologies.
ruby
conference

Aroso, Anne
On the job